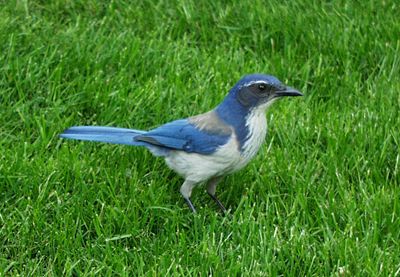 The California scrub jay is a species of scrub jay native to western North America. The California scrub jay is nonmigratory corvid that can be found in urban areas, where it can become tame and visit to bird feeders. While many refer to scrub jays as "blue jays", the blue jay is a different species entirely. Recent research has suggested that scrub jays, along with several other corvids, are ranked among the most intelligent animals. The brain-to-body mass ratio of adult scrub jays rivals that of chimpanzees and cetaceans, and is dwarfed only by that of humans.

California scrub jays, like many other corvids, exploit seasonal food availability by storing food in scattered caches. They rely on their complex memories to later recover the hidden caches. California scrub jays have a mischievous streak, even resorting to outright theft. They have been observed stealing acorns from woodpecker caches as well as from the caches of other jays they have observed stashing their acorns. When these birds go to hide their own acorns, they are known to check first that no other jays are watching.