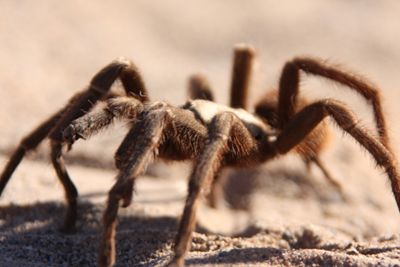 The California tarantula is a very docile native spider. Tarantulas are not poisonous to humans, though like all spiders they have venom that is effective on small arthropods for subduing their prey. While female tarantulas can live for up to 25 years, the average lifespan of the male is only seven or eight years.

One of the many predators of tarantulas is the “tarantula hawk” which is really a large wasp. A female wasp will sting and paralyze a tarantula, then drag it back to her burrow. She then lays an egg on the spider. When the egg hatches, the wasp larva will feed on the tarantula.

If you are lucky enough to see a tarantula on the trail, you can take pictures because they move slowly, but humans shouldn’t touch or otherwise harass them.