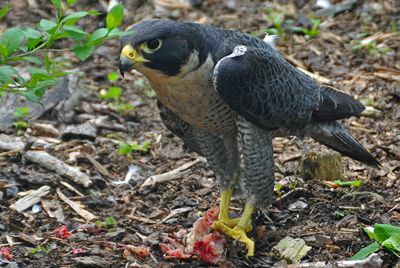 The peregrine falcon (Falco peregrinus), also known as the peregrine and historically as the duck hawk in North America, is a widespread bird of prey in the family Falconidae. A large, crow-sized falcon, it has a blue-grey back, barred white underparts, and a black head and "moustache". As is typical of bird-eating raptors, peregrine falcons are sexually dimorphic, females being considerably larger than males.The peregrine is renowned for its speed, reaching over 320 km/h (200 mph) during its characteristic hunting stoop (high speed dive),making it the fastest member of the animal kingdom. According to a National Geographic TV program, the highest measured speed of a peregrine falcon is 389 km/h (242 mph).