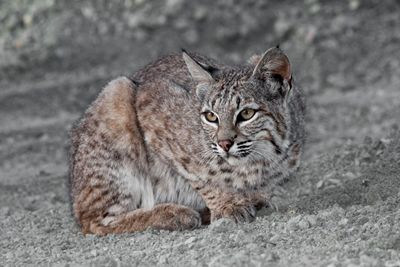 The bobcat (Lynx rufus) is a North American mammal of the cat family Felidae, appearing during the Irvingtonian stage of around 1.8 million years ago (AEO).With 12 recognized subspecies, it ranges from southern Canada to northern Mexico, including most of the continental United States. The bobcat is an adaptable predator that inhabits wooded areas, as well as semidesert, urban edge, forest edges, and swampland environments. It remains in some of its original range, but local populations are vulnerable to extirpation by coyotes and domestic animals.