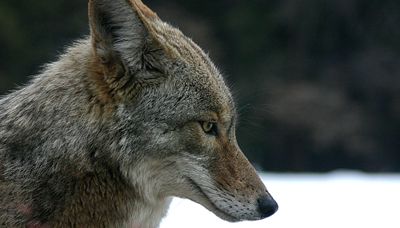 The coyote ( Canis latrans) is a canid native to North America. It is a smaller, more basal animal than its close relative, the gray wolf,being roughly the North American equivalent to the old world golden jackal, though it is larger and more predatory in nature. It is listed as "least concern" by the IUCN, on account of its wide distribution and abundance throughout North America, Mexico and into Central America. It is a highly versatile species, whose range has expanded a midst human environmental modification.

CAUTION: Coyotes may be dangerous to pets (small dogs). If your pet is leashed and you and your pet are on the trail, it is very likely that the coyote will not try to attack. Coyotes generally are not interested in confronting people, even small children. Of course, parents should always keep an eye on children while on the trail, but coyotes pose no special danger. They are usually not aggressive toward humans unless humans attempt to feed or interact with coyotes. While there are reports of coyotes attacking and killing a person, these types of incidents are extremely rare. Remember, coyotes are wild animals. They can be seen during the day, but they are most active in the evening and at night.

If you see a coyote, you can stop and watch, but do not approach it. As with any wild animal, if it feels threatened by someone coming toward it or chasing it, it may feel the need to protect itself. DO NOT FEED or attempt to feed them. Once a wild animal gets accustomed to being fed by humans there is much more likelihood that an individual will get bitten by an animal looking for food.