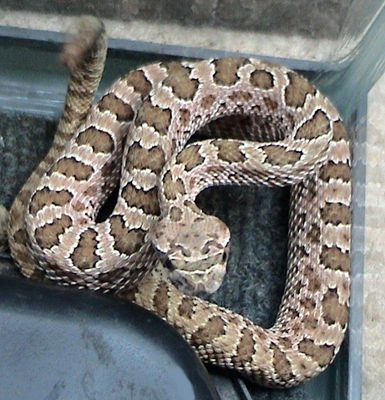 Crotalus viridis (Common names: prairie rattlesnake, western rattlesnake, plains rattlesnake, and others) is a venomous pit viper species native to the western United States, southwestern Canada, and northern Mexico. Western rattlesnakes live on the land, but it can sometimes climb in trees or bushes. Some even rest in crevices or caves. They are typically active diurnally in cooler weather and nocturnally during hot weather. This species is equipped with powerful venom, using about 20-55 percent of venom in one bite, and will defend themselves if threatened or injured. As with other rattlesnake species, western rattlesnakes will rapidly vibrate their tails, which produces a unique rasping sound to warn intruders.

CAUTION: Rattlesnakes may strike when they feel threatened or are provoked. Rattlesnake bites can cause serious injury. In the event of a snake bite, stay calm and get to a doctor right away.