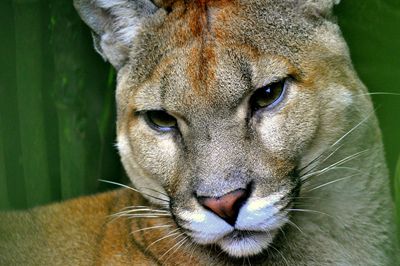 The cougar (Puma concolor), also commonly known as the mountain lion, puma, or catamount, is a large felid of the subfamily Felinae native to the Americas. Its range, from the Canadian Yukon to the southern Andes of South America, is the greatest of any large wild terrestrial mammal in the Western Hemisphere.

CAUTION: If you see a lion, stop and do not run. Be sure to travel in groups when in lion country. Keep children next to you. Maintain eye contact and do all you can to appear larger. Speak calmly to the lion in a firm, calm voice. If attacked, fight back. Lions have been known to be driven away by prey that fights back.

Mountain lion sightings are rare and there are few attacks on people. Most of these attacks have been by young lions that have been forced to hunt on their own and are not yet living in established areas. They will key in on easy prey such as pets and small children.