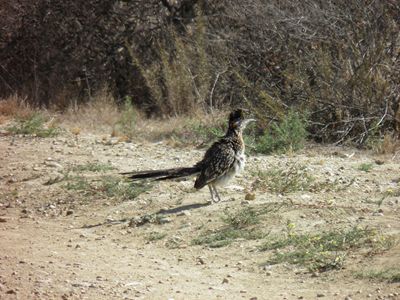 The greater roadrunner (Geococcyx californianus) is a long-legged bird in the cuckoo family, Cuculidae, from Southwestern United States and Mexico. This roadrunner is also known as the chaparral cock, ground cuckoo, and snake killer. Along with the lesser roadrunner, it is one of two species in the roadrunner genus Geococcyx.

Although capable of limited flight, the roadrunner spends most of its time on the ground and can run at speeds of up to 20 mph. It runs down its prey, feeding mainly on small animals including insects, spiders (including black widows), tarantulas, scorpions, mice, small birds and especially lizards and small snakes. Even venomous serpents, including small rattlesnakes, are readily consumed. It kills prey by holding the victim in its bill and slamming it repeatedly against the ground.