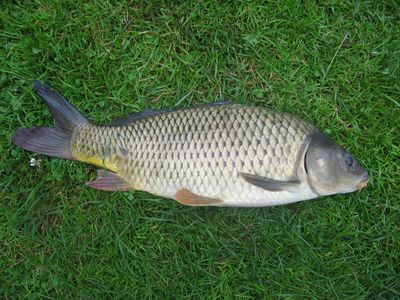 The common carp (Cyprinus carpio) is a widespread freshwater fish of eutrophic waters in lakes and large rivers in Europe and Asia. The wild populations are considered vulnerable to extinction, but the species has also been domesticated and introduced into environments worldwide, and is often considered a very destructive invasive species, being included in the List of the world's 100 worst invasive species. It gives its name to the carp family: Cyprinidae.