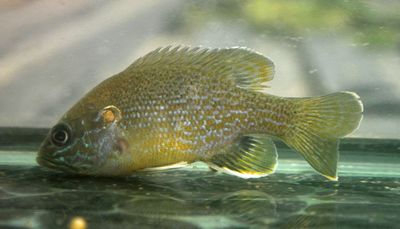 The green sunfish (Lepomis cyanellus) is a species of freshwater fish in the sunfish family (Centrarchidae) of order Perciformes. A panfish popular with anglers, the green sunfish is also kept as an aquarium fish by hobbyists. They are usually caught by accident, while fishing for other game fish. Green sunfish can be caught with live bait such as nightcrawlers, waxworms, and mealworms. Grocery store baits such as pieces of hot dog or corn kernels can even catch fish. Small lures have been known to occasionally catch green sunfish. They can be caught with fly fishing tackle.