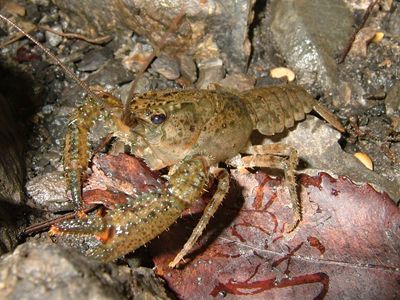 Crayfish, also known as crawfish, crawdads, freshwater lobsters, or mudbugs, are freshwater crustaceans resembling small lobsters, to which they are related; taxonomically, they are members of the superfamilies Astacoidea and Parastacoidea. They breathe through feather-like gills and are found in bodies of water. Some species are found in brooks and streams where there is fresh water running, while others thrive in swamps, ditches, and rice paddies.