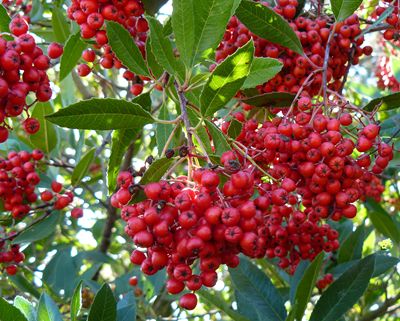 Heteromeles arbutifolia commonly known as toyon, is a common perennial shrub native to extreme southwest Oregon, California and Baja California. Toyon is a prominent component of the coastal sage scrub plant community, and is a part of drought-adapted chaparral and mixed oak woodland habitats. It is also known by the common names Christmas berry and California holly. Accordingly, "the abundance of this species in the hills above Los Angeles... gave rise to the name Hollywood."

Toyon flower are visited by butterflies. The fruit are consumed by many birds, including mocking birds, robins and cedar waxwings and mammals such as coyotes and bears.

The berries provided food for local Native American tribes, such as the Chumash, Tongva, and Tataviam. Native Americans made a tea from the leaves as a stomach remedy. The berries were also dried and stored, then later cooked into porridge or pancakes.

CAUTION: Toyon may be toxic humans or animals if ingested.