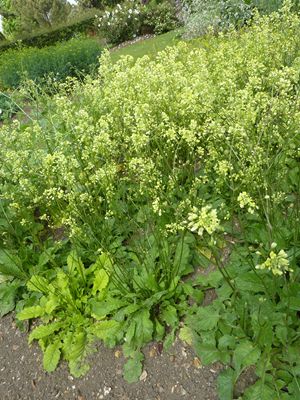 Brassica nigra (black mustard) is an annual, non-native weedy plant that has naturalized in southern California. It is commonly found in disturbed soils including along road- and trail-sides. It can be cultivated for its seeds, which are commonly used as a spice. The spice is generally made from ground seeds of the plant, with the seed coats removed. The small (1 mm) seeds are hard and vary in color from dark brown to black. They are flavorful, although they have almost no aroma. The seeds are commonly used in Indian cuisine, for example in curry, where it is known as rai.

CAUTION: Black Mustard may be toxic to horses.  The plant is not typically ingested unless other forage is unavailable, or the plant is incorporated into hay.