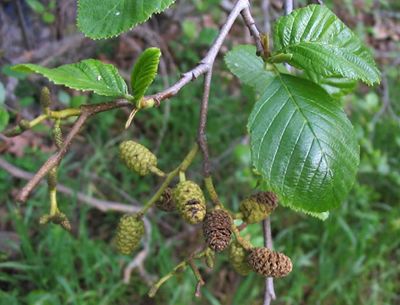 Alnus rhombifolia, the white alder, is an alder tree native to western North America, from British Columbia and Washington east to western Montana, southeast to the Sierra Nevada, and south through the Peninsular Ranges and Colorado Desert oases in Southern California. It occurs in riparian zone habitats at an altitudes range of 100–2,400 metres (330–7,870 ft). While not reported in northern Baja California, it has been predicted on the basis of its climatic adaptation to occur there also.