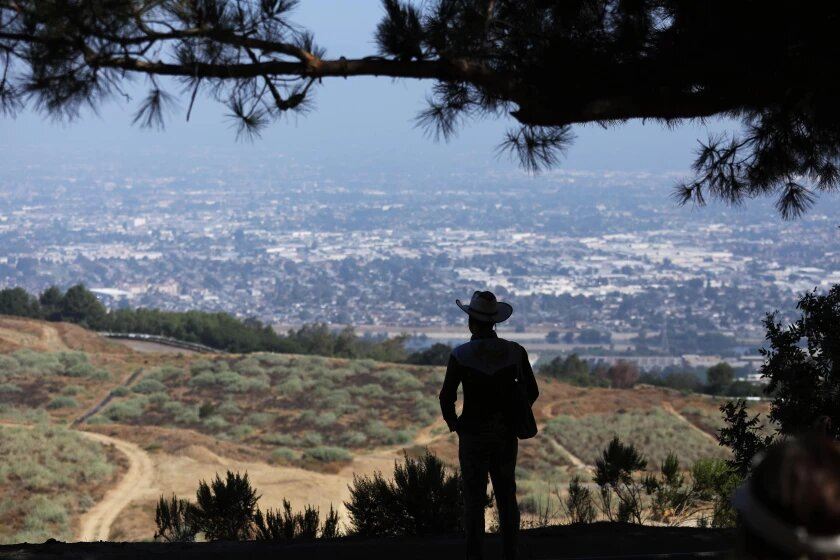 Bryan Matsumoto, program manager with Nature for All, looks out over the site of the future Puente Hills Regional Park from Nike Hill in unincorporated Hacienda Heights. (Genaro Molina / Los Angeles Times)

It was once the nation’s largest trash heap. Now it’ll be an inspirational L.A. County park

Standing atop Nike Hill, Victor Moreno brushed sweat from his brow and dust from his eyes.

The three-mile run on a sun-drenched afternoon had been a challenge, but the payoff was worth it: From the 1,160-foot-high spot in the Puente Hills, he was treated to a glorious 360-degree vista. Los Angeles’ skyscrapers jutting into the sky to the west, the grandeur of the San Gabriel Mountains to the north. To the east was the seemingly endless Inland Empire, with Orange County’s suburbs spread to the south. 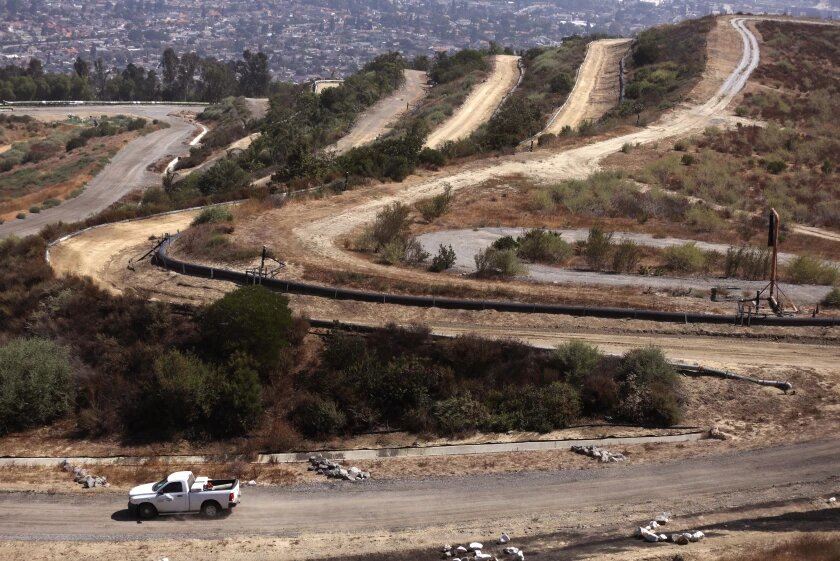 A truck drives through a portion of the future Puente Hills park in July. The landfill operated from 1957 until its closing on Oct. 31, 2013. (Genaro Molina / Los Angeles Times)

But what really mattered to Moreno, 32, was the chance to introduce his 12-year-old daughter, Janae — who was on her first climb — to some things many city dwellers never see: darting lizards, hopping rabbits and diving birds of prey. For years the partially paved trail has been a refuge for Moreno, a place to unwind and, more recently, unmask. The Hacienda Heights resident said he’s looking forward to his daughter making memories there.

Much of the natural space surrounding the trail for decades was part of the nation’s largest trash heap — the Puente Hills Landfill, which held one-third of Los Angeles County’s garbage. Now it is set to become the first regional park the county has created in 30 years.

“It’s hard to find this view anywhere in Los Angeles,” Moreno said. “We’re lucky to have this and to pass this on to the next generation.”

The L.A. County Board of Supervisors recently approved $28.25 million to begin work on planning and construction of the Puente Hills Regional Park, carved from 142 acres of the former 1,356-acre landfill.

“It has been six years since the Puente Hills Landfill Park Master Plan was completed, and nine years since the landfill closed. Our communities have waited far too long for this park,” Supervisor Hilda Solis, who grew up in La Puente and represents the area where the park will be located, said after the funding motion passed.

“We see this park as a restoration of land that was unusable and unsuitable for the community,” said Norma Edith García-González, director of the Los Angeles County Department of Parks and Recreation. 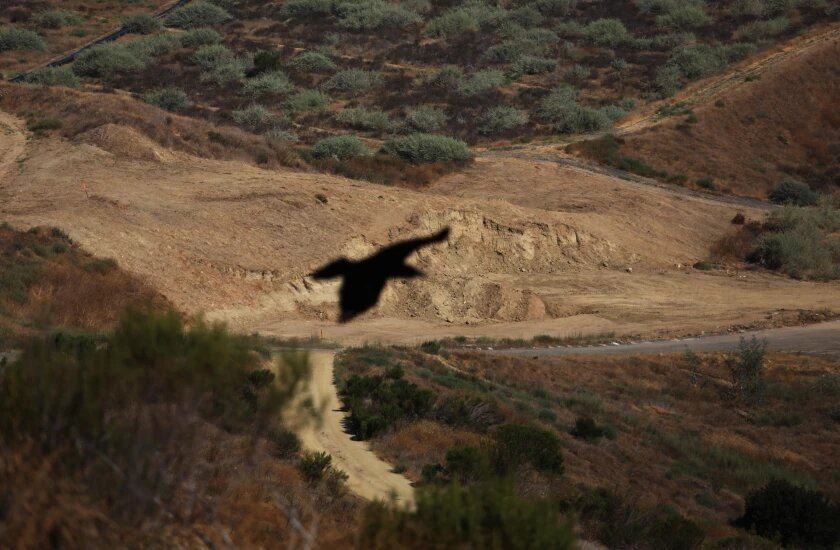 A crow flies over a portion of the future Puente Hills Landfill Park in Puente Hills on July 13, 2022. The Los Angeles County Department of Parks and Recreation gave a tour of what will be the first regional county park built within the San Gabriel Valley in 30 years. (Genaro Molina/Los Angeles Times)

“Now these communities that sacrificed so much living next to this landfill can benefit from its rehabilitation.”

The landfill operated from 1957 until its closing on Oct. 31, 2013. Trash is estimated to have covered 602 acres, been piled 500 feet high and weighed approximately 130 million tons.

Nancy Lara, who has lived a half-mile from the landfill site for more than two decades, spent years at war with the rodents, mosquitoes and flies she said were attracted to the garbage dump. The infestation was so bad that she encouraged neighborhood stray cats to stick close to her home to kill the rats and mice. The landfill’s smell was a near constant, she said.

“I never really thought anything was going to happen because there was talk about closing the landfill and building a park for years,” Lara said. “Nice to see that things are finally happening.”

The need for more green space in the eastern and southeastern communities of Los Angeles County is undisputed.

Hikers strike a pose for their friend, off camera, against a backdrop of the future Puente Hills Landfill Park from Nike Hill in Puente Hills on July 13, 2022. The Los Angeles County Department of Parks and Recreation gave a tour of what will be the first regional county park built within the San Gabriel Valley in 30 years. (Genaro Molina/Los Angeles Times)

“Parks are critical infrastructure … to healthy communities,” Kjer said. “We see direct correlation between places like Beverly Hills, that have many parks, and Watts, that lack them. There’s a significant life expectancy difference.”

(A 2017 Los Angeles County report cited green space and bike paths as important factors in longer lifespans, along with components such as fresh produce stores, affordable healthcare and a strong work-life balance. )

In total, $114 million has been set aside — a combination of county and state funding — for the first phase of construction in Puente Hills; the entire project could take more than two decades to complete, with the first construction shovels set to break ground in 2025.

In the meantime, Boyle Heights’ Studio-MLA, a landscape and architectural design firm hired by the parks department, will conduct community outreach, while officials secure the permits needed for work to begin.

As for the trash, it continues to settle under protective clay caps laid across the landfill to prevent rainwater from mixing with the debris. There is also a system of pipes to move gases, primarily methane, away from the refuse and into storage to eventually be sold to the Southern California Gas Co.

Maintenance and supervision of the trash beneath the park are expected to continue for 75 years, as the garbage settles and eventually compresses by an estimated 25%. In some parts, the settling may shrink the underground trash heaps by as much as 125 feet.

Approximately 300,000 yards of soil has been added to 27 of the 40 acres of the western section of the park site, where construction will begin. That earth will create a “lasagna structure” of defense, where trash is buried below layers of clay and soil, García-González said.

“The science is there to support this effort,” said Studio-MLA founder Mia Lehrer, citing other landfills that have successfully been converted into parks. She touted Palos Verdes Peninsula’s South Coast Botanic Garden, a former diatomaceous earth mine and landfill that was remodeled into a garden in 1961, as an example.

After Phase 1 is completed, future sections of the Puente Hills park will include horse, bike and running trails, a dog park, bike park, ecology visitor center, slides situated throughout the hills and areas for food trucks.

The plan was well-received during several rounds of community feedback, according to parks and recreation staff. But one drawback noted by several residents was a lack of athletic fields. 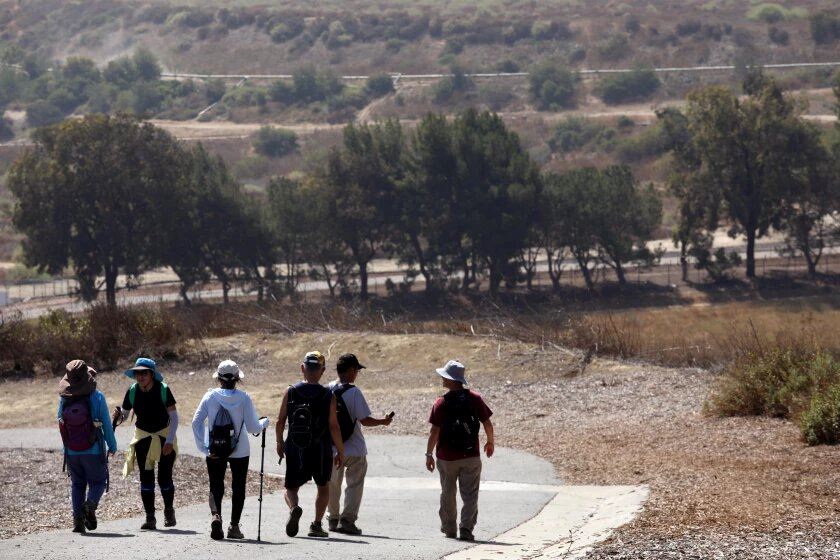 Hikers make their way down a road where the future park will be developed in Puente Hills. The park will include multi-use trails, running loops, a bike skills park and area for horseback riding.

There is no space for sports facilities due, in part, to the uneven nature of the settled ground and the difficulty of maintaining grass fields while keeping water from seeping into the refuse below.

“The bells and whistles sound great, but I’m disappointed we can’t have a park for soccer or football or softball,” said La Puente resident Kelly Torres, 38, a mother of two, after a hike. “We need this in the area.”

Hector Hernandez, a Baldwin Park resident who spotted hawks while on a nature walk with two of his children — ages 10 and 6 — disagreed.

The 53-year-old said he plays soccer in a Sunday “beer league” that meets in Glendale. What he looks forward to is a quieter, more kid-friendly place to take his family.

“You can find soccer fields all over the place,” he said, “but finding nature close by and this view is something else. It should be protected.”