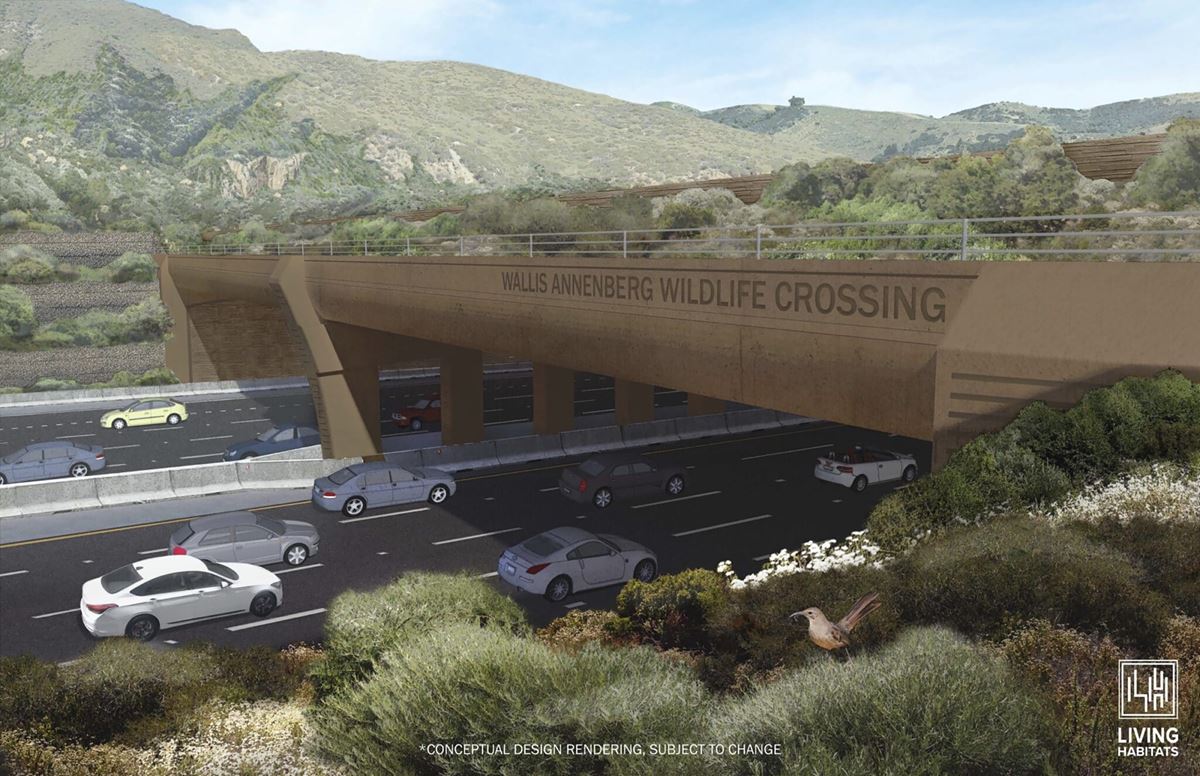 Wildlife Crossing Will Stretch Across Hwy 101

The roads and highways humans have built bisect the natural environment and divide the ranges and migratory routes of many species, presenting a danger to the animals who need to cross them.

This month, the world’s largest wildlife overpass — the Wallis Annenberg Wildlife Crossing — will begin construction across a multi-lane highway at Liberty Canyon in the Santa Monica mountains. The 210-foot long, 165-foot wide green bridge will allow animals like mountain lions, coyotes, snakes and toads to safely cross U.S. Highway 101 near Los Angeles, reported The Guardian. It will be surrounded by an acre of native plants, and sound walls covered with vegetation will be put in place to help shield nocturnal animals from noise and light. 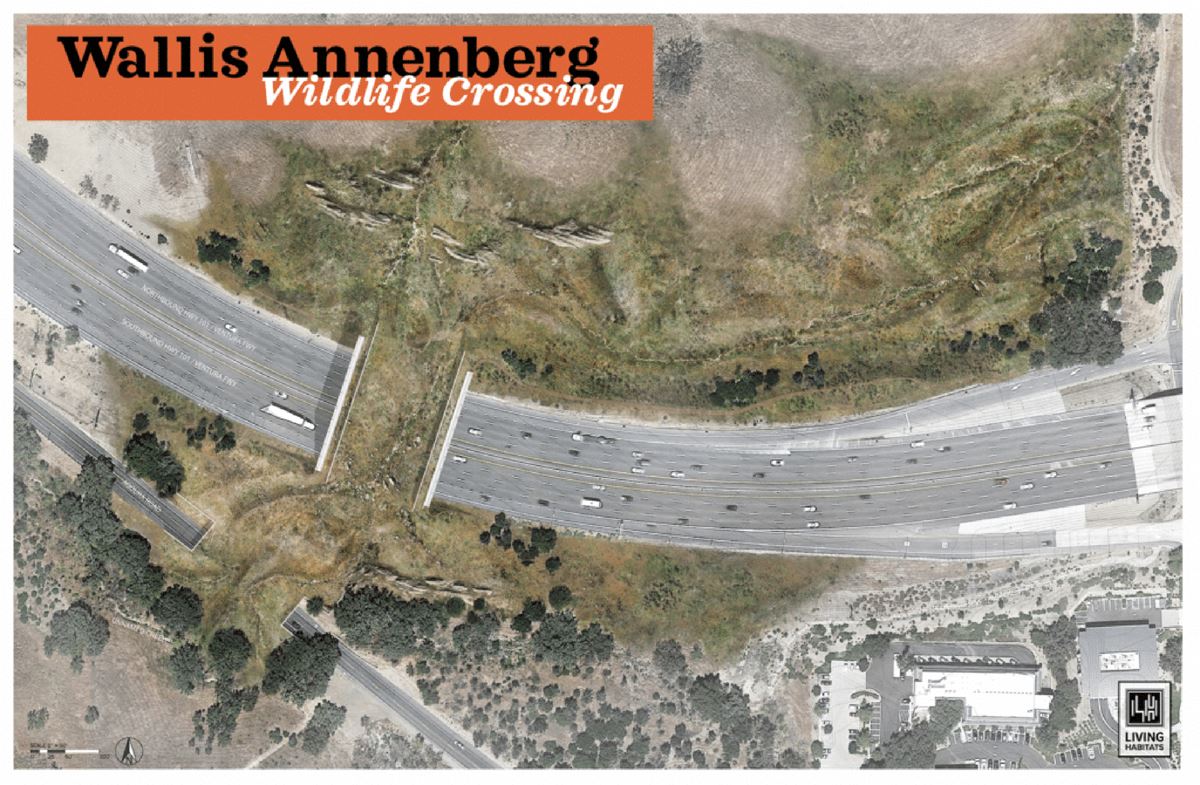 “The freeway is a formidable and virtually impenetrable barrier for many wildlife species including mountain lions, bobcats, gray foxes, coyotes, and mule deer that inhabit and travel between these two mountain ranges,” the Santa Monica Mountains Conservancy said in a press release. “For mountain lions in particular, the consequences of this restriction results in increased inbreeding and territorial fighting, and very low genetic diversity, within the Santa Monica Mountains.”

Mountain lions are a “specially protected species,” according to the California Department of Fish and Wildlife. Since 2002, at least 25 mountain lions have been killed on freeways in Los Angeles, The Guardian reported. And on March 23, a young mountain lion was killed on the Pacific Coast Highway.

The groundbreaking ceremony for the Wallis Annenberg Wildlife Crossing will coincide with Earth Day on April 22, and the bridge is expected to be completed in early 2025. About 60 percent of the funding for the approximately $90 million wildlife crossing came from private donations.

Every day about 300,000 cars move through the area of the forthcoming wildlife bridge. 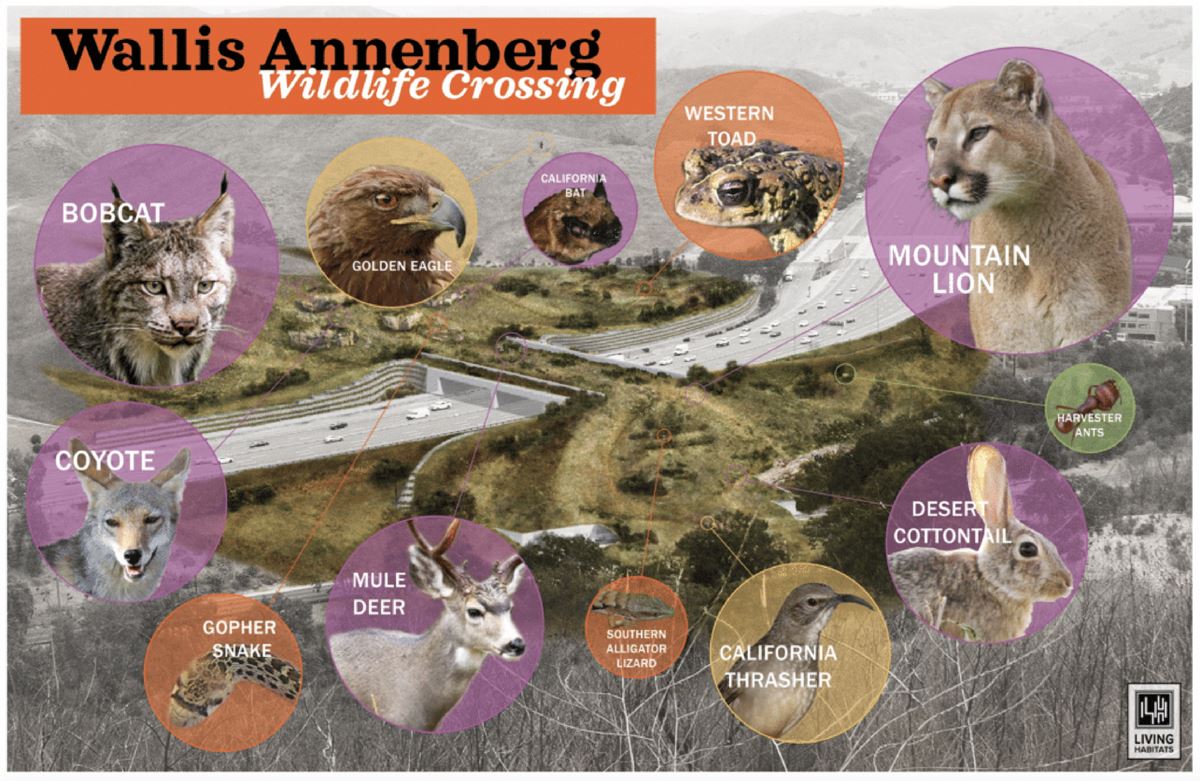 “Someone could be in rush-hour traffic, and there could be a mountain lion right above them,” said project planner and urban ecologist with the National Wildlife Federation Beth Pratt, according to The Guardian. “I think that’s such a hopeful image, and one that inspires me that we can right some of these great wrongs.”

A well-known mountain lion called P-22 who lives in Griffith Park in the Loz Feliz neighborhood of Los Angeles and criss-crosses freeways to roam his habitat has come to represent the plight of the many wild animals who have had their homes destroyed and divided by human development.

“People really took his plight to heart, and this is not just a California story: the world has come together around his cause,” Pratt said, as The Guardian reported.

Unfortunately, P-22 isn’t likely to be one of the mountain lions in the area who uses the bridge, since his range lies farther east.

It could take as long as five years for some animals to grow accustomed to using the crossing.

Canada’s Banff National Park is an example of the success of wildlife crossings. With more than three dozen overpasses and underpasses for animals, the park has seen a 90 percent decrease in accidents between vehicles and wildlife.

Hopefully there will be many more in the future, as communities come together to try and help humans and wildlife live together more safely and peacefully. The Biden administration’s infrastructure bill has $350 million set aside for things like underpasses, overpasses and fences to help wildlife.

“As both a tool for and a symbol of connection, [the Wallis Annenberg Wildlife Crossing] will stand as an alluring challenge to future generations to pick up the mantle of design to bridge the gaps elsewhere in our world,” said design leader and landscape architect with Chicago’s Living Habitats Robert Rock, as reported by The Guardian.