Everywhere we go, we leave a trail of trash. Here’s what you can do to help. 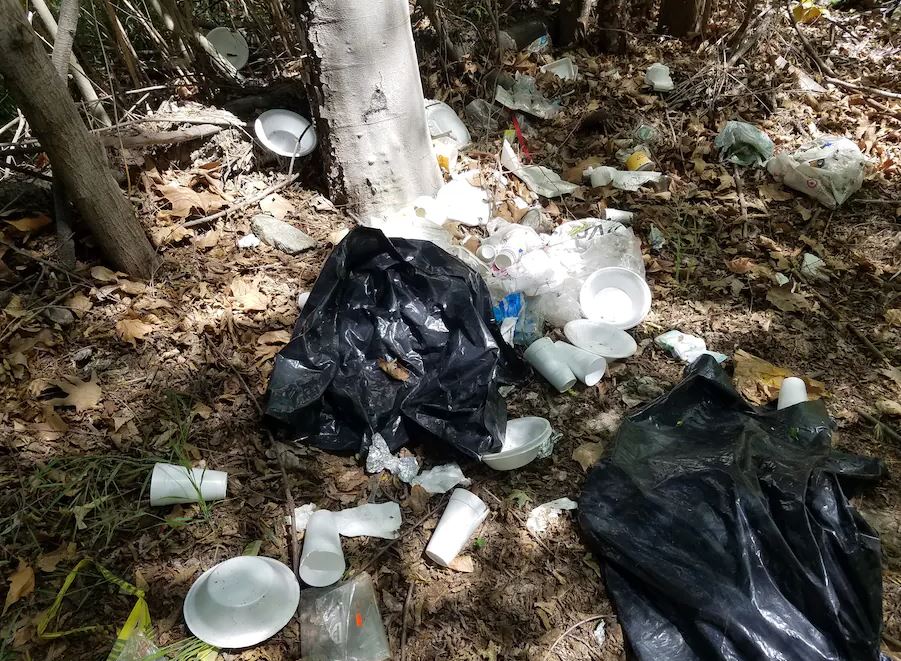 Some years ago, in the company of my stepmother, Carla, I spent four days hiking the Inca Trail to Machu Picchu, counting stone steps and trying to keep my eyes open for blue morpho butterflies and the orchid called Wiñay Wayna, meaning “forever young.” There were verdant mountainsides and llamas and songbirds, and above it all, there were huge, low-hanging clouds that shifted to reveal icy glaciers made fluorescent by the afternoon sun.

But there were also, at breadcrumb intervals, numerous wax paper squares that had once contained Halls lozenges. Among the 500 people allowed on the trail in Peru that day, one person clearly had a sore throat. As I stooped to collect the wrappers, my vision expanded to include discarded beverage bottles and candy bar packaging. We found a plastic grocery bag and filled it with human-made detritus. At the end of the day, our guide, Fabrizio, noticed our efforts.

“Let me take the basura,” Fabrizio said, pointing to the trash bag at Carla’s hip. “We’ll give it to the porters. They will carry it.”

[The ‘garbage guy’ walks 12 miles a day around D.C. picking up trash: ‘I’ll pick up pretty much anything’]

Decades of weekly garbage service had kept me from considering that my tidying would now add to the burden of the local porters who already carried our bread, eggs and water; our sleeping bags, toothbrushes and tea bags; and even the “solids” we left in the portable toilet. According to trail regulations, nothing could be left behind. Whether it’s being hauled in a truck to the dump or carried in a pack on your back, trash belongs to all of us. 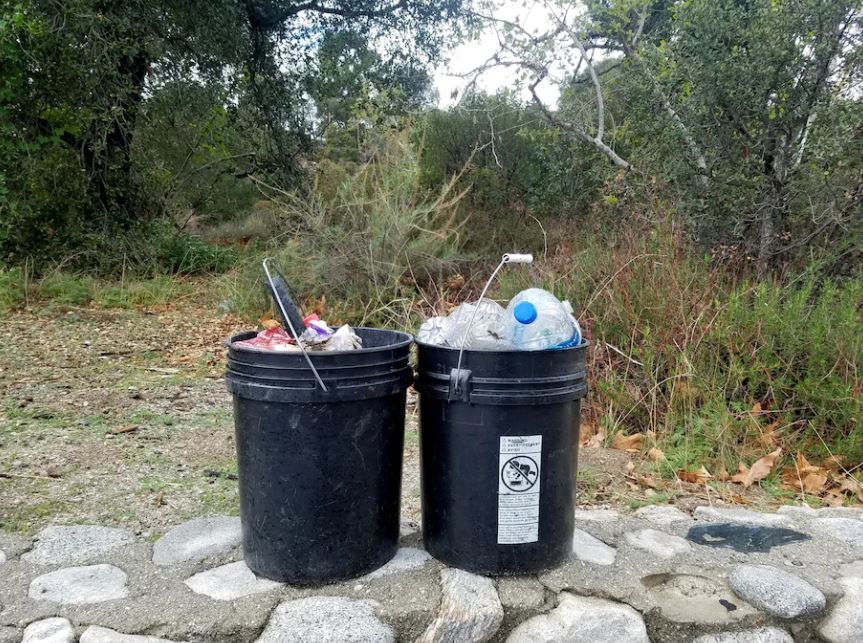 “People,” Fabrizio said, when confronted with scattered refuse on the Inca Trail or graffiti carved into an agave, “they are a problem.”

These past months, my hikes have taken me no farther than the trails of Griffith Park near my home in Los Angeles. The paths are often crowded with fellow city dwellers, who, like me, are anxious to escape the stress of the pandemic. I’ve seen an increase in trash. There are paper masks, beer cans and knotted dog poop bags left like party favors at the side of the trail. As I gather the junk, it’s hard for me to square the idea that, for some, a desire to be in nature might coexist with a lack of regard for nature.

“Ah, the duality,” Fabrizio often said during our time on the Inca Trail. This reference to the Andean concept of dualism had, for him, become a shorthand explanation for exactly this conundrum. People are a problem. People are a solution.

“Don’t worry about the litterbugs,” climate activist and San José State University student Edgar McGregor tells me. “There’s nothing you can do to stop them, but you can undo their actions by picking up litter.”

McGregor popped up in my Twitter feed early in 2020, when his daily #EarthCleanUp reports from Eaton Canyon park in Pasadena, Calif., were a much-needed boost of positivity. His number of followers soared as he single-handedly cleaned up what he refers to as “his park,” a popular outdoor area roughly three miles long and a half-mile wide, beginning on May 29, 2019. After 750 days, he declared it free of trash. The next day, he returned for maintenance.

Inspired by his work and his Twitter presence, people from all over the world have begun to pick up a bag or bucket in his honor. When I spoke with him, McGregor had just completed his 810th daily trash cleanup, where, in just 20 minutes, he had filled a five-gallon bucket and pulled a huge foam block from a dried creek bed.

“Start small,” he advises. “Get started and let the project take you where it goes.” 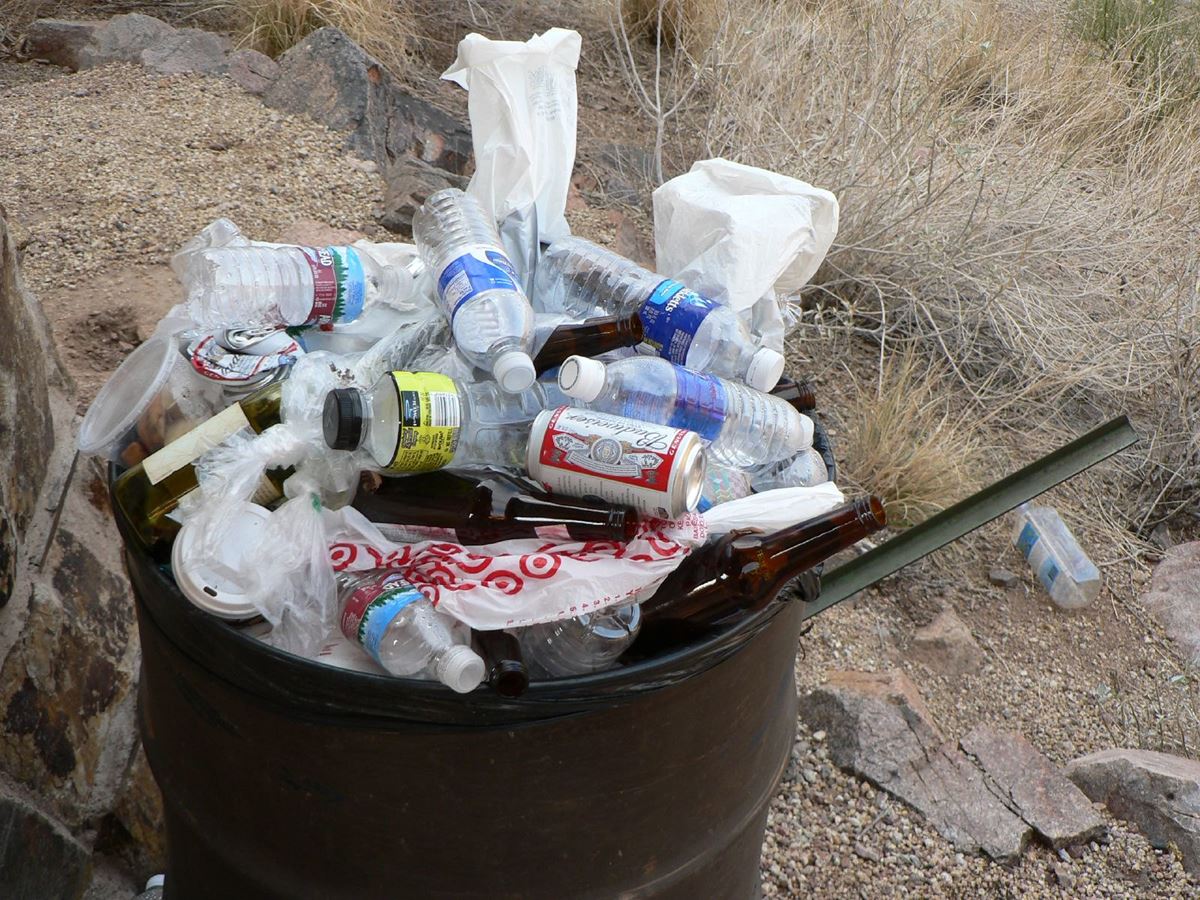 Erin Fein, a Los Angeles musician and founder of the Echo Park Trash Club, agrees. After noticing an uptick in neighborhood trash, Fein used the Nextdoor website to invite her neighbors to join a weekend cleanup.

“I looked around at the city I lived in and wanted to be part of the solution,” she says. “My organizing abilities and my understanding of social media come from being a musician. I was delighted to find out that the same skills can be applied to a social issue.”

“We were limited in the amount of trash we could pick up, because I was putting it all in my car and moving it back to my apartment dumpster,” Fein says.

Eventually, persistent members of the group developed a partnership with the city, which now provides the club with a trash pickup.

Continually widening its scope of work, Fein’s group also connected with Theo Henderson, who uses his podcast, “We the Unhoused,” to advocate for the rights and voices of the unhoused. Henderson helped the group learn how to operate sensitively with and near encampments. This action, Fein says, “created an opportunity to work with everyone — the people in houses and the people without houses — everybody working together in a compassionate group.”

Can the ‘largest cleanup in history’ save the ocean?

The more formalized Adopt a Block program in Washington, D.C., helps volunteer groups connect directly with sanitation services, and it provides tools and support, as well as dedicated signage and promotion.

“Picking up trash is the easiest way to be involved and active in the community,” says Julie Lawson, director of the D.C. Mayor’s Office of the Clean City. “There shouldn’t be any barriers.”

It was early in 2020 when Patricia Stamper adopted her Ward 7 block in the Deanwood neighborhood, but she was already feeling the pressure of pandemic shutdowns.

“I thought, ‘It’s going to be awhile, and these kids need something to do.’?” She credits the “thick skin and resilience” she has developed as a parent and elementary school teacher for helping her “redirect the energy” on her block. She provided treats and homework assistance in exchange for trash collection, and she relayed information about bulk pickup and recycling services to her adult neighbors.

“Living in the District, you hear all these big, lofty ideas, but a lot of them never get done,” she says. “This is something that can happen and can be sustainable.” 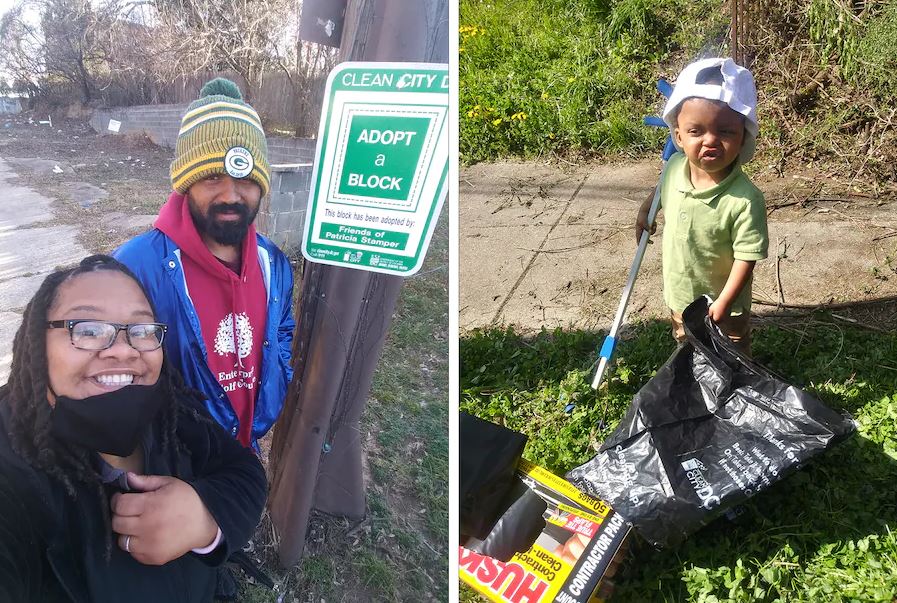 The achievement of a goal often comes from starting small and staying local. “That’s what’s so powerful about community,” Fein says, relating her experience with the Echo Park Trash Club. “You feel that it’s yours, even if you don’t own it.”

That sense of ownership has fueled the national Adopt a Highway program for decades now, and my stepmother shares this philosophy. For nearly 40 years, Carla has been the caretaker of a scenic stretch of NM 536 leading to Tinkertown Museum, the New Mexico roadside attraction she built with my father. The official state sign is a point of pride, but it’s her sense of contributing to something larger than herself that keeps her going.

Still, unless we limit the production of plastic and rethink our consumption of other resources, no matter how much trash we pick up, there is always going to be more.

McGregor tells me that he works hard to keep from being depressed by what can seem to be an insurmountable task.

“I wouldn’t have made it past Day Five of these cleanups if I let myself think that people would just litter again. Thinking too much can keep you from acting.”

The hills of Griffith Park rise above the grit and noise of the city. Ravens test the currents over the canyons, and rabbits sprint into the brush. Action takes over, and my brain wanders far and wide. Putting one foot in front of the other, I keep my eyes open to both the butterflies and the bottle caps.